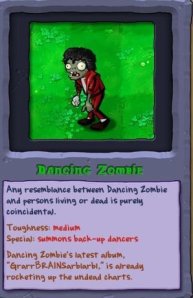 The Michael Jackson inspired Dancing Zombie is to be pulled from the delightful Plants vs. Zombies.

Popcap told MTV that the move comes after a request made by lawyers representing the late King of Pop.

“The Estate of Michael Jackson objected to our use of the ‘dancing zombie’ in Plants vs. Zombies based on its view that the zombie too closely resembled Michael Jackson.

After receiving this objection, PopCap made a business decision to retire the original ‘dancing zombie’ and replace it with a different ‘dancing zombie’ character for future builds of Plants vs. Zombies on all platforms. The phase-out and replacement process is underway.”

Plants vs. Zombies was released on the PC in May 2009 – two months before Michael Jackson’s death – and reached the iPhone earlier this year. The tower defence game will hit Xbox Live in September.

Dancing Zombie will be ditching the ‘Thriller’ look in favour of a disco inspired outfit. What are the odds on influence from Disco Stu?

So, Train2Game universe, what do you think of the move? Do you think the Jackson estate was justified to call for Dancing Zombie to be changed? Or is it a mountain out of a molehill? And here’s an interesting one, what would you do if your independent title was threatened with legal action for one reason or another? Is it something you’ve even considered?

As usual, leave your comments here or on the Train2Game forum.