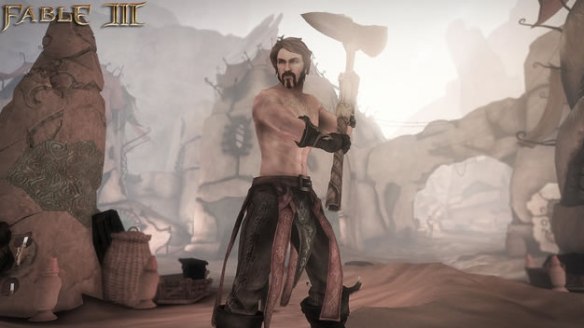 Microsoft has released the first piece of DLC for Fable III and it’s called the Understone Quest Pack.

The additional content gives Fable III players three new quests to complete based around the town of Understone, which perhaps unsurprisingly is underground. It’s below the streets of Bowerstone to be precise. Microsoft give the new addition to Fable III the following description:

“Designed by the peculiar mind of inventor Montague Hummes following the uncertain events that unfolded in “Fable II,” Understone brings new houses and stalls to own, creatures to conquer and a mystery to solve.”

Heres what Fable III players can expect from the three new Understone based quests:

“The Voice”: In the main quest, explore the mysterious underground land built by Montague Hummes in fear of the Spire in “Fable II”

“Shooting Range”: After defeating Saker during your quest to become King or Queen, the remaining Mercenaries have turned their camp into a tourist attraction. The main attraction being the re-playable shooting range mode

“The Wheel of Misfortune”: After Reaver vacated his home, he set up a venture for budding heroes to replay the thrilling arena-based challenges within his new dwellings

Other new bits and pieces of DLC for Fable III include the Exclusive Hair Pack, which allows you to give your character “corn rows, afro and asymmetrical bob styles” and costs 160 Microsoft Point. The 5 Star Dog Potion which ““gives your canine companion the full 5-star ability for digging, diving and tracking down hidden chests right from the start” and will set you back 80 Microsoft Points.

Also out today are a Reaver Industries Hero Outfit and a colourful Dye Pack for 160 and 80 Microsoft Points respectively.

Fable III topped the UK Chart in it’s first week of release at the end of October. In this weeks UKIE GfK Chart Track All Formats Top 40, the game lies in 24th spot.

You can check out the Fable III trailer here.

So Train2Game, have you finished Fable III? If so are you at all interested in the Understone Quest Pack? Would you part with your money to give your character a special hair style or some brightly coloured clothes?  Or have you already finished with the game for good?