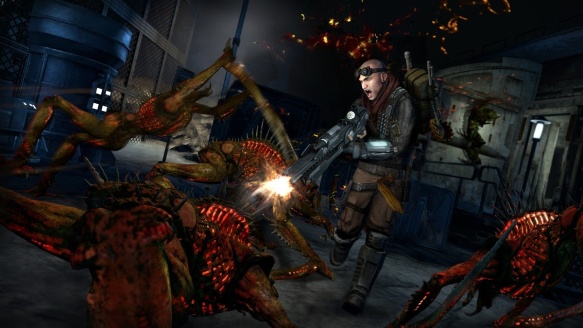 The Train2Game blog was recently lucky enough to grab a chat with Volition’s Jameson Durall, Lead Level Designer of the upcoming Red Faction: Armageddon. In a wide ranging interview that’ll be of interest to anyone on a Train2Game course, Durall discussed the impressive Geo-Mod engine, how it impacts on Game Design, what goes on behind the scenes during game development at Volition, and revealed to us his tips for getting into the games industry.

In the second part of this interview, Durall continues to discuss how the Geo-Mod engine influences Game Design, how it could potentially be used for modding, and the game development process at Volition. Part one is already available on the Train2Game blog.

Train2Game blog: Can you tell us a bit about the process of how creating and designing new enemies actually works?

Jameson Durall: In our case we wanted to build something to further enhance the experience of the destruction. We had humans in [Red Faction] Guerrilla and we wanted to do something where we could be a little bit more elaborate with them. One of our main goals with taking a good chunk of the game underground was we could utilise the walls and the ceilings, so we wanted to also have enemies that we could do that with as well.

And so when we’re developing each of the types of the aliens, we wanted to make sure they were able to attach themselves to the walls, and attach themselves to the ceilings, giving them different ways to come into the world. So if the player goes in and blows up everything we wanted a way to make sure we can keep refilling the battle or making it as intense as we want. So we did things like the ‘Monster Closet’ so we could bring more into the battles when we needed to.

Train2Game blog: Is the advancement in the Geo-Mod engine the reason why Red Faction: Armageddon has mostly moved underground and is no longer sandbox style as in previous game Red Faction: Guerrilla?

Jameson Durall: One of the things we found with Guerrilla was that the restrictions of building such a destructible area meant that we had to have a lot of space in between each of those encounters. So one of the things with going underground allowed us to do was, we’re not having to draw these vast distances so we can really intensify areas with a lot more destruction. So we wanted to make sure; one, that we got a more dense destruction area, plus we wanted to make sure the player didn’t have to wait as long in between them and we’ve accomplished that goal.

We were handed a fantastic technology for this game, and the Geo-Mod is truly remarkable; so for us it was making sure ‘what could we do on top of that, how could we integrate it a little more in the gameplay’ and not have to worry about having these gaps and what we could do to make sure it was more action packed, and let the player do what they want to do more which is blow things up.

Train2Game blog: Can you see the Geo-Mod engine or something like it being used in other games aside from Red Faction? Or even for modding purposes in future?

Jameson Durall: I think that’s totally possible. There’s a lot of interesting applications for something like that; just think of a quick Xbox LIVE game that you could make which is a fully destructible cartoon style world. The technology itself could transfer to anything that you want to do, it’s a fully physics based destructible world.

Train2Game blog: How does the Game Design team come up with the story and characters? Is it very much a team based effort? Or do individual designers work on individual parts?

Jameson Durall: It’s definitely a team based thing. Certain things will come in when we want to accomplish ‘X goal’ and then we’ll work together to figure out what we can mould around it to make sure that we accomplish that goal. Even the levels themselves have to be built around certain particular story points that we want to make sure we achieve.

So for us there’s a whole lot of each designer working together with our creative director and working with the writing department making sure everyone’s on the same page, that we focus on the key points we have to achieve and then how do we build the rest of the game around that.

You can read part 1 of our interview here on the Train2Game blog.