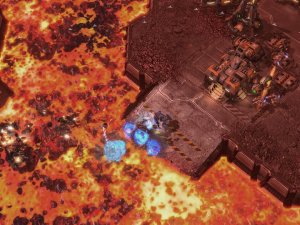 “Like the campaign mission, the goal of this game is greed, and the first team to reach the specified resource total wins! Players hoping to achieve victory on this map will need to work together, carefully managing their team’s unit production and safeguarding their vulnerable workers as they defend against enemy forces.”

Starcraft II players can access Burning Tide in the custom games list in the game client. It’s likely that Burning Tide will be the first of many custom maps released by Blizzard for Starcraft II: Wings of Liberty. Any interested Train2Game students can get a taste of Burning Tide by looking at the screenshots on the Starcraft II Battle.net blog.

Activision Blizzard is extremely pleased with the success of Starcraft II, with Wings of Liberty being the fastest selling strategy game of all time, selling 1.5 million copies in the first 48 hours of release. Starcraft II then went on to sell three million copes in the month after its much anticipated release on July 27th.

So Train2Game, will you be playing Burning Tide? Or have you done so already? Are you pleased Blizzard are releasing more multiplayer challenges for Starcraft II?