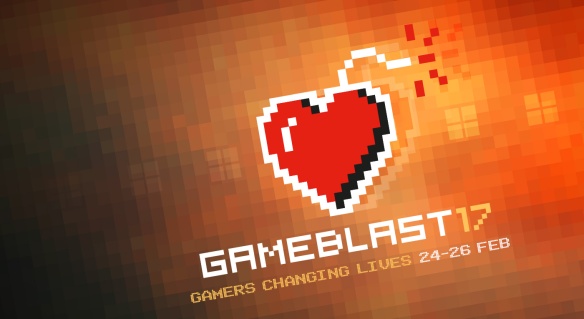 Gamers’ charity SpecialEffect have set the countdown clock running for GameBlast17, the UK’s biggest charity gaming weekend.
The event, held over the weekend of 24-26 February, aims to raise £100,000 to support the work of the charity in helping people with disabilities to access and benefit from video games.

Over 100 individuals and teams of gamers from around the world have already signed up to fundraise through their own gaming marathons and gaming events during the three days.

Many major names in the video games industry are backing the event, including GAME, Multiplay, Twitch, FACEIT, Insert Coin and ukie, alongside a host of eSports teams, streamers and studios.

GAME are planning a 24-hour livestream event from their headquarters and will also be running a number of fundraising initiatives via their UK stores. Other planned activities include charity streams from Ripstone Games, Wired Productions and even a 72 hour Zeldathon.

“It’s incredible to see how the event has grown over the past four years. The funds raised will enable us to help more like John (http://bit.ly/2gDZxF4), who never thought he’d be able to play video games again because his condition stopped him using a standard controller.”

“GameBlast17 is an opportunity to bring people together to do what they love and level the playing field for people with disabilities at the same time.”

“This is the ideal time to sign-up and start planning your event, and we’re inviting everyone from the global gaming community and industry to join us.”