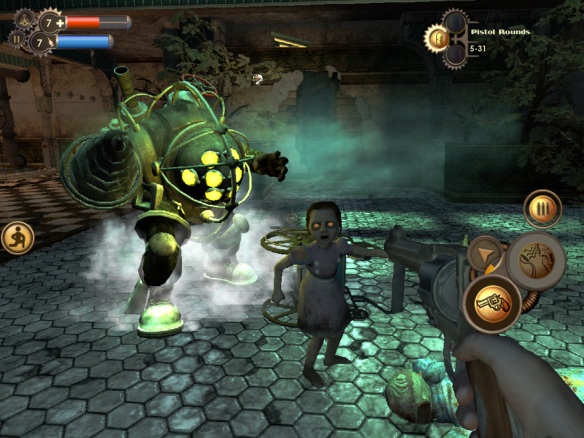 Developed by Irrational Games in 2007 with Unreal Engine 3, the original BioShock made extensive use of Havok’s Animation tools, which played an instrumental part in bringing fluidity to the disfigured denizens of Rapture. The game’s liberal use of Havok Physics also brought further immersion into the game world, even becoming a powerful weapon through the use of the in-game Telekinesis Plasmid. After its release, Bioshock quickly became one of the most critically-acclaimed games of all time, garnering universal praise from press and proving to be a huge success with the gaming audience.

The 2K China team has brought this iconic gaming experience to iOS using Havok’s cross-platform toolset to achieve amazing parity between console and mobile versions, including the full dynamic gameplay and character interactions of the classic title from 2007. Seven years after its original implementation, the same robust Physics and Animation technologies ingrained in the original BioShock have seamlessly transitioned onto mobile platforms.

“It’s a true testament to the power and breadth of Havok Physics and Havok Animation Studio that these technologies have seamlessly transitioned from a AAA console title to an amazing mobile experience,” said Brian Waddle, Vice President of Worldwide Sales and Marketing at Havok. “Just as BioShock redefined the scope of what a game could and should be, the 2K Games team has proven that mobile devices can go beyond simple apps and offer a wholly mature and complete gaming experience akin to those seen on high end gaming platforms.”

BioShock will be available soon via the App Store as a premium title for iPad, iPhone and iPod touch.