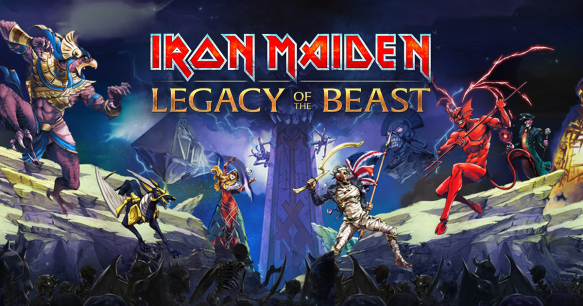 Nodding Frog, Roadhouse Interactive and 50cc Games are pleased to announce that the  Founders Packs for their  Iron Maiden: Legacy of the Beast  mobile game are now available direct from  www.ironmaidenlegacy.com/founders

Founders Packs and Collector’s Editions are relatively commonplace in PC and console gaming circles, but something new in mobile gaming. In keeping with the spirit of innovation prevalent throughout Iron Maiden’s career, Legacy of the Beast Founders Packs will offer fans and players limited edition collectibles, exclusive insider access to game-design forums, rare in-game Eddies and boatloads of ‘Ferryman’s Gold’ (in-game currency) to commemorate the launch of the game.

“There are tons of Maiden fans at Roadhouse, and rock, metal and punk is a big part of our studio culture with lots of the team wearing band shirts at any given time. We decided to create some exclusive apparel to celebrate the launch of the game and show off the many iterations of Eddie that appear in it. It’s been fantastic to see the band’s fan base show their support for the project online, engaging with our social channels and sharing their views on what we’re up to. Alongside the T-shirts, Hoodies, and other cool swag, we’ve created a new opportunity for fans, gamers, and newcomers alike to have an even greater role in the creation and direction of the game with the Founders Forum” says James Hursthouse, CEO, Roadhouse Interactive.

Llexi Leon, Creative Director, Phantom Music Management, added “With the Founders campaign we’re offering exclusive access, awesome in-game items, and some killer custom-designed Iron Maiden gear. As a video games Collector’s Edition addict I’ve been particularly thrilled to curate this range, and we’re all excited to be pioneering this approach in the mobile space. We’ve combined items you might expect like T-shirts and Hoodies with totally new offerings, such as exclusive character art cells, a gorgeous giclee on canvas print, and a beautiful digital art book.”

“We’re offering incredible value in every pack, working with our partners at Global Merchandise and Dark Ink Art to ensure the same top quality products our fans expect, but at an unprecedented discount to celebrate this amazing game and the expansion of the Iron Maiden universe. Our friends at Onkyo have even provided a limited number of the remarkable hand-wired Japanese made Ed-Ph0n3s as part of our top tier Eternity pack, a jaw dropping collection that’s limited to 666 units on a first come first serve basis.”

All those who order a Founders Pack will get to participate in online discussions with the development team, be granted access to exclusive community forum content, and have the opportunity to vote on the direction of the game and proposed content.

Seven packs have been created, five of them themed to in-game iterations of the band’s iconic mascot, Eddie, in a variety of character classes. The Packs range from the digital only Part of the Legacy Pack, right up to the strictly limited Eternity Pack that contains all the character class Eddie T-Shirts and art cells from previous tiers, a pair of extremely limited items including an archival quality print on canvas and a premium embroidered hoodie, topped off with a set of Onkyo’s Maiden Audio Ed-Ph0n3s, representing amazing value across the board.

Priced in Canadian Dollars and shipping worldwide, the packs are available for a limited time only and will be dispatched throughout June / July 2016, to coincide with the game’s global launch.

At the time of going to press, the in-game digital add-on packs will be an option only applicable for Android users.

Iron Maiden: Legacy of the Beast, is an action-packed, free-to-play epic mobile RPG steeped in Iron Maiden mythology, and launches on both iOS and Android platforms in June 2016. “Maiden Vancouver, Played Everywhere!”