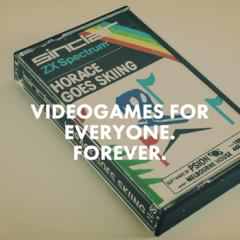 ​A pioneering new not-for-profit organisation has today been launched in Nottingham, UK.

The National Videogame Foundation exists to celebrate, preserve and interpret videogames for everyone. Through its pioneering work in curation, exhibition and public engagement, it rediscovers the past and creates a valuable legacy for the future.  The Foundation aims to inspire new people to make videogames, start new conversations about them, and find new ways in which they can contribute to culture, society and education.

Based at the acclaimed National Videogame Arcade in Nottingham’s Creative Quarter, the Foundation will work across four key areas : events, heritage, education and policy-making.

As well as delivering the annual  GameCity festival and operating the National Videogame Arcade, the new Foundation will also be concentrating on education and public advocacy work.

Later this year, in collaboration with the Times Educational Supplement, the Foundation is staging the first in a series of ‘subject summits’, bringing together educators with experts to explore ways in which videogames can be used to enhance  learning. These unique events will result in the creation of new teaching and learning resources to apply videogames to other curriculum areas in addition to the more expected STEM subjects.

In collaboration with Arts Council England, the foundation will be delivering further on the ‘Continue’ conference and network, launched earlier this year. This project brings together national arts and culture organisations with videogame creators, closing the gap of understanding between them.

“We’re tremendously excited to be able to finally announce the National Videogame Foundation to the World. It’s something we’re very passionate about, but we couldn’t have imagined being able to launch it with a stronger set of partners and activities,” said  Director, Iain Simons.

Iain continued, “We’ve got some of the most experienced names in the industry working with us right alongside some of the most exciting new ones. We’re going to ensure that the work we produce is truly reflective of the growing diversity of videogames, in terms of players, makers and content.”

Carl Cavers, CEO of Sumo Digital is a key investor in the new Foundation. He said, “One of the main reasons Sumo were attracted to Nottingham was the NVA and GameCity. It’s great to be able to play a part not just in securing its position as a unique destination in the City, but also to be helping to build its future plans and make it useful for the cultural future of games. It’s a great moment for the industry.”

The foundation launches with a stellar set of founding patrons already attached, helping the foundation to realise its ambitions.  Sumo Digital, Epic Games, Playground Games, Kevin Patterson, Boneloaf, William Pugh, Chucklefish and  Vlambeer have all invested at this founding stage.

Ian Livingstone CBE, games industry legend, Foundation investor and member of the non-executive board said, “I am tremendously excited to be involved in the creation of the National Videogame Foundation. Having watched videogames grow and flourish as an industry – and as an art form – this is a vital moment for videogames’ cultural confidence.

Nottingham has already shown itself to be the cultural capital of videogames with the GameCity festival and our very own ‘National Gallery’ in the form of the National Videogame Arcade. Given these achievements, it is only fitting that this new, not-for-profit organisation should grow out of the same soil and continue to spread this pioneering message to as many people as possible.

What excites me most about the National Videogame Foundation is its commitment to taking its work out into the real world. Through its education programmes, gallery interpretation and cultural policy development, Iain Simons and his team will continue to work tirelessly to engage everyone in the value of this most vital of contemporary art forms. We’ve got an amazing set of founder-patrons on board already and I urge all my colleagues in the games industry, and frankly anyone who cares about the past, present and future of videogames, to support this landmark initiative.”

Rami Ismail of famed developer Vlambeer said, “Having been a regular attendee of the GameCity festival over the years, it was an easy decision to invest and become a patron of the new foundation. The festival is a phenomenally inclusive event, and brings creators from around the world together to showcase and experience pioneering cultural work. Vlambeer is excited to be part of the future of the event.”

You can find out more details about becoming a patron of the National Videogame Foundation along with many other opportunities to support or get involved, at www.thenationalvideogamefoundation.org