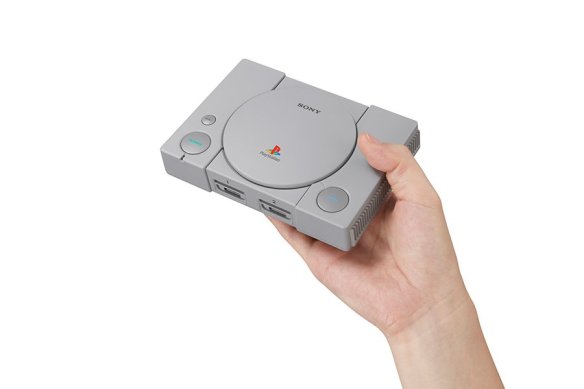 Sony Interactive Entertainment (SIE) today announced that PlayStation®Classic, a miniature games console that mirrors the look of the original PlayStation® and comes preloaded with 20 original games, will launch in limited quantities on December 3, 2018, in Japan, North America and Europe.

PlayStation Classic will be available at a manufacturer’s suggested retail price of 9,980 yen in Japan, $ 99 USD in North America and € 99 in Europe.

The original PlayStation made its debut in Japan on December 3, 1994, and with landmark innovations such as enabling real-time 3DCG rendering and adopting CD-ROMs had a huge impact on the games industry in the 1990s and beyond.

The design of the PlayStation Classic resembles PlayStation, including the button layout, as well as controllers and outer package, but in a miniature size, it is 45% smaller on the sides and 80% smaller in volume than the original console. Pre-loaded with 20 PlayStation games such as Final Fantasy® VII (SQUARE ENIX Co., LTD.), Jumping Flash! (SIE), R4 RIDGE RACER TYPE 4, Tekken 3 (BANDAI NAMCO Entertainment Inc.), and Wild Arms (SIE).

PlayStation Classic is a perfect fit for anyone including the current PlayStation fans as well as nostalgic fans that enjoyed playing the original PlayStation and gamers new to PlayStation who want to experience classic PlayStation games from the 1990s.

PlayStation Classic includes an HDMI™ cable for connecting to an external displays such as TV monitors, and a USB cable which needs to be connected to a commercially sold USB AC Adaptor for power supply from the plug. On select supported titles, users can play with or against their friends with the two Controllers included with the console.

SIE will continue to further expand its software portfolio across PlayStation platforms as well as its network services to deliver entertainment experiences that are only possible on PlayStation.