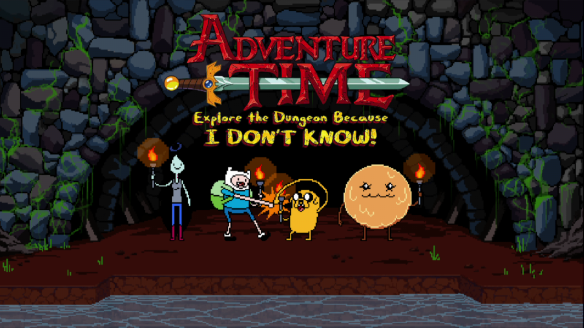 The game, based on the hit animated series, has been published by NAMCO BANDAI Games Europe in the UK and is on Xbox 360 games and entertainment system from Microsoft, and the PlayStation3 computer entertainment system. The game will also be coming on Nintendo´s Wii U system on 6 December, and on the Nintendo 3DS system on the 13 December, 2013.

Adventure Time: Explore the Dungeon Because I DON’T KNOW! is an action adventure game with a completely new storyline from Pendleton Ward, the creator of the Emmy Award-nominated Adventure Time television series, in collaboration with game developer WayForward.

The adventure begins in the Land of Ooo as players help Princess Bubblegum save the Candy Kingdom by exploring the mysteries surrounding a massive Secret Royal Dungeon.  Adventure Time: Explore the Dungeon Because I DON’T KNOW! features the voices of the show’s most popular characters and players can select from multiple fan-favorite characters with up to four players, including Finn, Jake, Marceline, Ice King, and more.  A wide selection of upgrades is available at the player’s disposal and they can showcase a number of attack moves, special abilities, and skills to defeat baddies throughout the dungeon.

“By collaborating with Pendleton Ward, the famous creator of the Adventure Time animated series, WayForward and D3Publisher have put an obvious care into making a brand new entertaining adventure game for fans of all ages.” said Mathieu Piau, EMEA Marketing Director for NAMCO BANDAI Games Europe. “Grab your friends now and share the radical fun of the multiplayer experience in Adventure Time: Explore the Dungeon Because I DON’T KNOW!”

Enjoy the trailer below!