Train2Game students probably aren’t surprised to see that Call of Duty: Black Ops remains at the top of the UKIE GfK Chart-Track All Formats chart this week, once again comfortably holding off its rivals.

Regular readers of the Train2Game blog will know that Call of Duty: Black Ops has topped the chart every week since it was released in early November. The only week Activision’s shooter hasn’t claimed Number 1 so far is the week Gran Turismo 5 was released.

FIFA 11 is also a non-mover, holding onto second place for the second week running. It’s an impressive feat when you consider the game was first released over two months ago. This weeks highest new entry is World of Warcraft: Cataclysm, with the PC exclusive expansion title taking third place after its worldwide launch last week. Train2Game students may be interested to here that Cataclysm’s achievement doesn’t include digital sales, according to GamesIndustry.biz.

The new entry of World of Warcraft: Cataclysm pushes Assassin’s Creed: Brotherhood and Gran Turismo 5 down one place each to fourth and fifth respectively. Just Dance 2 also drops one place to sixth place in this weeks All-Formats chart, while Need for Speed: Hot Pursuit is a non-mover in seventh.

Donkey Kong Country returns for the Nintendo Wii enters the top ten in its second week on sale, bounding five places up the chart to eighth place. Professor Layton and the Lost Future for the Nintendo DS and Wii Fit Plus round out the top ten, having swapped positions since last week.

Michael Jackson: The Experience and Wii Party both drop out the top ten, falling to 11th and 12th respectively.  Former Number 1 Fallout: New Vegas doesn’t look like it’ll be reentering the top ten any time soon, dropping from 11th to 18th place.

Disney’s Epic Mickey enters the top 40 for the first time, but only manages to sneak up to 37th place.

The full UKIE GfK Chart-Track All Formats Top Ten for the week ending December 11th is as follows:

So Train2Game, are you at all surprised that World of Warcraft: Cataclysm didn’t take Number 1? Or was it always going to be difficult for a PC exclusive to knock down Call of Duty: Black Ops? And with Christmas fast approaching, which game do you think will the all important title of Christmas Number 1?

World of Warcraft: Cataclysm is now available worldwide after midnight launch events saw gamers brave the freezing December conditions to be among the first to get their hands on the expansion. Did any Train2Game students attend a launch?

One of the many World of Warcraft: Cataclysm launch events took place at Leicester Square in London where Blizzard developers Greg Street and Dave Kosak answered questions and signed copies of the game. Of course, plenty of cosplayers attended the events too. The London launch event was hosted by Gadget Show presenter Jason Bradbury.

“Cataclysm adds an incredible amount of new content for players to explore, revitalizing the game world and building on everything we’ve learned since World of Warcraft launched over six years ago,” said CEO and cofounder of Blizzard Entertainment Mike Morhaime.

“We thank all of our beta testers for helping make this our best expansion yet, and we’re looking forward to seeing everyone in the new Azeroth.”

Naturally, the Blizzard servers got very busy once Cataclysm became available at midnight. A few Train2Game students were no doubt among the many, many World of Warcraft players struggling to log in to the much changed world.

World of Warcraft currently has over 12 million subscribers, could Cataclysm encourage even more people to play? The release of Cataclysm also arguably marks the last big game launch of the year.

The last PC exclusive game to be released with a massive launch event was Starcraft II. The strategy title went on to take the top spot in the UK Charts, could World of Warcraft: Cataclysm do the same?

So Train2Game, have you been playing World of Warcraft since Cataclysm? If so what are your thoughts on the brave new world? Did you attend a midnight launch? And do you believe that Cataclysm could take top spot in the charts from Call of Duty: Black Ops? 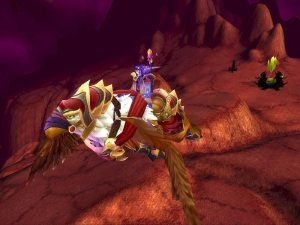 Wow, that’s a lot of money being made from World of Warcraft subscriptions.

“The support and enthusiasm that gamers across the world continue to show for World of Warcraft reaffirms our belief that it offers one of the best entertainment values available today,” said Mike Morhaime, CEO and cofounder of Blizzard Entertainment.

“We are as committed as ever to taking the game to new heights, and we look forward to demonstrating that with Cataclysm in December.”

Yep,  the momentum of World of Warcraft looks set to continue, with this announcement following the confirmation that expansion pack number three, World of Warcraft: Cataclysm, is set to be released on December 7th.

The definition of a World of Warcraft subscriber according to Activision Blizzard is as follows:

World of Warcraft subscribers include individuals who have paid a subscription fee or have an active prepaid card to play World of Warcraft, as well as those who have purchased the game and are within their free month of access. Internet Game Room players who have accessed the game over the last thirty days are also counted as subscribers. The above definition excludes all players under free promotional subscriptions, expired or cancelled subscriptions, and expired prepaid cards. Subscribers in licensees’ territories are defined along the same rules.

World of Warcraft: Cataclysm will be available from December 7th. The release date of the highly anticipated expansion to World of Warcraft was revealed by publisher Activision Blizzard.

The Cataclysm expansion pack will dramatically change the world of Azeroth, and allow World of Warcraft players to take part in new missions, level their World of Warcraft characters up to level 85 and play the worlds’ most successful MMO as two new races – worgen and goblins.

The official announcement about when World of Warcraft: Cataclysm is released comes after rumours on fan sites including MMO Champion and WoWHead. CEO and cofounder of Blizzard Entertainment, Mike Morhaime, says World of Wacraft: Cataclysm will be good for both old and new Wow players.

“Cataclysm includes the best content we’ve ever created for World of Warcraft. It’s not just an expansion, but a re-creation of much of the original Azeroth, complete with epic new high-level adventures for current players and a redesigned levelling experience for those just starting out.”

“With the help of our beta testers, we’re putting on the final polish, and we look forward to welcoming gamers around the world to enjoy it in just a couple of months.”

Activision Blizzard keenly point out in their press release that the first two World of Warcraft expansions, The Burning Crusade and Wrath of the Lich King, both broke PC game sales records upon their release. These PC game sales records were broken earlier this year by another Activision Blizzard title, Starcraft II: Wings of Liberty. The publisher must therefore be expecting another big payday when World of Warcraft: Cataclysm is released on December 7th!

The World of Warcraft: Cataclysm beta test is currently underway, and you can sign up for a chance to participate on the official Battle.net website.