Warner Bros. Interactive Entertainment and DC Entertainment revealed the Official Injustice™ 2 Story Trailer – “The Lines are Redrawn.”
Witness the story set in motion in Injustice™: Gods Among Us as new DC characters join the fight and shape the actions that unfold in the upcoming sequel. Injustice™ 2  will release for the PlayStation®4 computer entertainment system and Xbox One in the UK on the 19th of May 2017.

Injustice™ 2  is NetherRealm Studios’ super-powered sequel to the hit game Injustice™: Gods Among Us that allows players to build and power up the ultimate version of their favourite DC characters.

Featuring a massive selection of DC Super Heroes and Super-Villains, Injustice™ 2  continues the epic cinematic story introduced in Injustice™: Gods Among Us as Batman and his allies work towards putting the pieces of society back together while struggling against those who want to restore Superman’s™ regime.  In the midst of the chaos, a new threat appears that will put Earth’s existence at risk.

​Today Telltale unveil the digital release date and world premiere trailer for BATMAN – The Telltale Series.
The first of five episodes in the season,   Episode 1: ‘Realm of Shadows’ will be available digitally worldwide starting Tuesday August 2nd on PC and Mac from the Telltale Online Store, Steam, and other digital distribution services, on the PlayStation®Network for PlayStation 4 and PlayStation 3, on the Xbox Games Store for Xbox One® and Xbox 360®, for compatible iOS devices via the App Store, and for compatible Android-based devices via Google Play and the Amazon Appstore.

Rendered to look like a living, breathing comic book, Telltale’s vision of Batman will feature an award-winning cast of talent, including   Troy Baker in the role of   Bruce Wayne,   Travis Willingham as   Harvey Dent,   Erin Yvette as   Vicki Vale,   Enn Reitel as   Alfred Pennyworth,   Murphy Guyer as   Lieutenant James Gordon,   Richard McGonagle as   Carmine Falcone, and   Laura Bailey as   Selina Kyle. Additional cast and characters will be revealed as the season progresses.

You can view the trailer at https://youtu.be/Za8G70bbKRY

BATMAN – The Telltale Series  will be making its worldwide debut as a digital download with its first episode in August on consoles, PC/Mac, and iOS or Android based devices. The series will be available to purchase at retailers starting Sept. 13 as a special “Season Pass Disc,” which will include the first of five episodes in the season, and will grant access to the subsequent four episodes as they become available for download via online updates  in North America. The series will then be available to purchase at retailers across Europe on Sept. 16.

“Telltale has a stellar reputation for delivering quality content based on world-renowned properties and these games make a great addition to our line-up,” said Kevin Kebodeaux, Senior Vice President, Sales, Americas, Warner Bros Interactive Entertainment.  “We previously worked with Telltale on The Wolf Among Us and now on the recently announced Batman – The Telltale Series, so we are very pleased to expand our partnership with worldwide retail distribution for its upcoming titles.”

“As a publisher and developer of award-winning content around the world, we’re thrilled to strengthen our relationship with Warner Bros. Interactive Entertainment to further extend our reach to retailers across the globe.” said Steve Allison, Senior Vice President, Publishing, Telltale Games. “Warner Bros. has been an incredible partner to work with, and we look forward to working with them to help ensure players can discover our unique, story driven experiences in stores everywhere for years to come.”

BATMAN – The Telltale Series is an episodic game series licensed by Warner Bros. Interactive Entertainment and based on DC’s iconic character. Rendered to look like a living, breathing comic book, Telltale’s vision of Batman will feature an award-winning cast of talent, including Troy Baker in the role of Bruce Wayne, Travis Willingham as Harvey Dent, Erin Yvette as Vicki Vale, Enn Reitel as Alfred Pennyworth, Murphy Guyer as Lieutenant James Gordon, Richard McGonagle as Carmine Falcone, and Laura Bailey as Selina Kyle. Additional cast and characters will be revealed as the season progresses.

Revealed this June at the E3 Electronic Entertainment Expo in Los Angeles, the highly anticipated third season of The Walking Dead – The Telltale Series will premiere later this fall across multiple platforms. The season will begin the tale of mysterious newcomer Javier, while also continuing the journey of young survivor Clementine as they both search for answers in a world ravaged by the undead. The Walking Dead is set in the world of Robert Kirkman’s award-winning comic book series and offers an emotionally-charged, tailored game experience where a player’s actions and choices affect how their story plays out across the entire series.

Warner Bros. Interactive Entertainment and DC Entertainment today announced Batman: Return to Arkham. The new title bundles Batman: Arkham Asylum and Batman: Arkham City, two of the most critically acclaimed videogames on the last generation of gaming consoles. Both are being remastered for PlayStation®4 computer entertainment system and Xbox One using Unreal Engine 4, a first for the award winning Batman: Arkham series. Remastered by Virtuos, this set offers fans a chance to play the first two Batman: Arkham titles including all Game of the Year edition bonus and downloadable content from both games, now with improved graphics, as well as upgraded models, environments, lighting, effects and shaders. Batman: Return to Arkham will be available beginning July 29 for a suggested retail price of £39.99.

Batman: Arkham Asylum is where it all began. Originally developed by Rocksteady Studios and released in 2009, the game pushed the envelope for action, adventure and super hero games and exposed players to a unique, dark and atmospheric adventure taking them to the depths of Arkham Asylum. Featuring an original story, gamers can move in the shadows, instill fear amongst their enemies and confront The Joker and Gotham City’s most notorious villains, including Harley Quinn, Bane, Killer Croc, Poison Ivy and Scarecrow, who have taken over the asylum.

Batman: Arkham City is Rocksteady Studios’ 2011 follow-up to Batman: Arkham Asylum. The game builds upon the intense, atmospheric foundation of Batman: Arkham Asylum, sending players soaring through the expansive Arkham City – the maximum security “home” for all of Gotham City’s thugs, gangsters and insane criminal masterminds. Featuring an incredible Rogues Gallery of Gotham City’s most dangerous criminals including Catwoman, The Joker, The Riddler, Two-Face, Harley Quinn, The Penguin, Mr. Freeze and many others, the game allows players to experience what it feels like to be The Dark Knight and deliver justice to those confined within Arkham City.

Batman: Return to Arkham is based on DC Comics’ core Batman license and is rated PEGI 16. Fans can visit http://Facebook.com/batmanarkham for more information about the game. 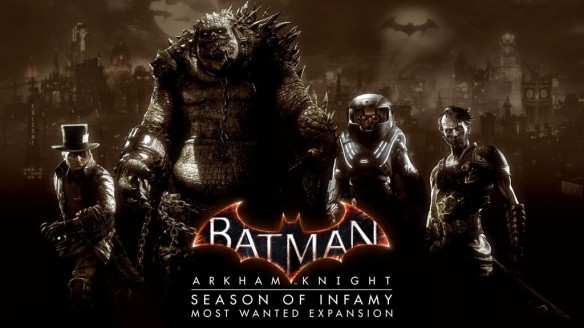 Warner Bros. Interactive Entertainment and DC Entertainment announced the Season of Infamy: Most Wanted Expansion for Batman™: Arkham Knight is available beginning today for fans who have purchased the Batman: Arkham Knight Season Pass for the PlayStation®4 computer entertainment system, Xbox One, or PC, and are connected to the Internet. The content is also available to purchase separately.

Play as Batman in the Season of Infamy: Most Wanted Expansion, protecting Gotham City from an invasion of legendary Super-Villains. Fight back against The Dark Knight’s biggest foes in four separate missions, with all new story arcs featuring DC Comics characters The Mad Hatter, Killer Croc, Ra’s Al Ghul and Mr. Freeze.

Season of Infamy missions include:
·         Wonderland: The Mad Hatter makes things personal as the Super-Villain lures Batman into a demented, hallucinatory battle of wits across Gotham City and within the pages of a twisted story book.
·         Beneath The Surface: The World’s Greatest Detective and Nightwing venture out to investigate Iron Heights, a flying airship prison that housed Killer Croc, after it crashed in the waters surrounding Gotham City.
·         Shadow War: Picking up after the events of Batman: Arkham City, Batman’s devout moral code is pushed to its limits as Ra’s Al Ghul’s health rebounds with the help of the League of Assassins.
·         In From The Cold: Mr. Freeze returns to Gotham City, where he is immediately entrapped in Arkham Knight’s Militia and Scarecrow’s plan to destroy Batman. Arkham Knight’s Militia has kidnapped Nora and will return her to Mr. Freeze in exchange for Batman’s capture.

Telltale Games, with Warner Bros. Interactive Entertainment and DC Entertainment, today announced an interactive episodic game series based on DC Comics’ iconic Batman™ that is set to premiere in 2016.

The official title for the Telltale series is yet to be revealed.

The episodic game series will premiere digitally on home consoles, PC/Mac, and mobile devices. Specific platform details are yet to be announced.

“At Telltale, we’ve been honored to bring our unique approach to interactive storytelling to some of the biggest entertainment franchises in the world, and we’re excited to announce that we’ll soon be exploring what it means to be Batman in an all-new series starting next year,” said Kevin Bruner, Co-Founder and CEO of Telltale Games.

“This iteration of Batman will give fans a first-hand opportunity to dive deeper into the complex life and mind of Bruce Wayne, the duality of his own identity, and the struggle of responsibility in saving a city overcome with corruption and villainy.”

“Telltale has an established track record of creating award-winning content for some of the best properties in the world,” said David Haddad, President, Warner Bros. Interactive Entertainment. “We look forward to working with the team as they deliver a new interactive way for fans and gamers to experience the rich narrative world of Batman.”

You can enjoy the teaser below 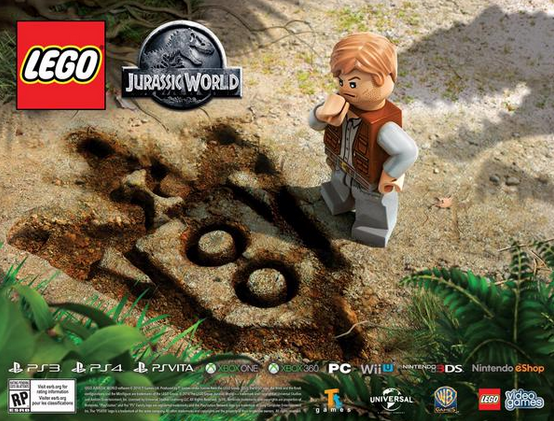 LEGO Dinosaurs have taken over… the charts number one spot as LEGO Jurassic World is back at number one with the caped crusader is second with Batman: Arkham Knight. No new games have entered the charts this week again. 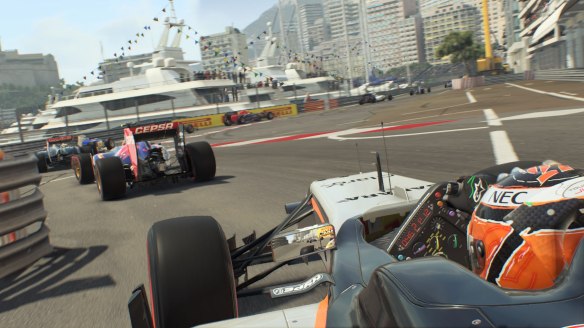 A surprising chart this week as petrol heads nation wide have dethroned the dark knight. F1 2015 is number one with Batman: Arkham City at number two. Lower down the charts is Disney Infinity 2.0 which debuts at number thirteen.

After several new games last week this weeks charts sees no new blood. The Caped Crusader remains at number one with Arkham Knight.

Batman: Arkham Knight is based on DC Comics’ core Batman license and will be available on June 23rd, 2015 exclusively for the PlayStation 4 computer entertainment system, Xbox One, the all-in-one games and entertainment system from Microsoft, and PC.

Batman: Arkham Knight brings the award-winning Batman: Arkham trilogy from Rocksteady Studios to its epic conclusion. Developed exclusively for the new generation of consoles and PCs, Batman: Arkham Knight introduces Rocksteady’s uniquely designed version of the Batmobile. The highly anticipated addition of this legendary vehicle, combined with the acclaimed gameplay of the Batman: Arkham series, offers gamers the ultimate and complete Batman experience as they tear through the streets and soar across the skyline of the entirety of Gotham City.

In this explosive finale, Batman faces the ultimate threat against the city that he is sworn to protect, as Scarecrow returns to unite the super criminals of Gotham City and destroy the Batman forever.