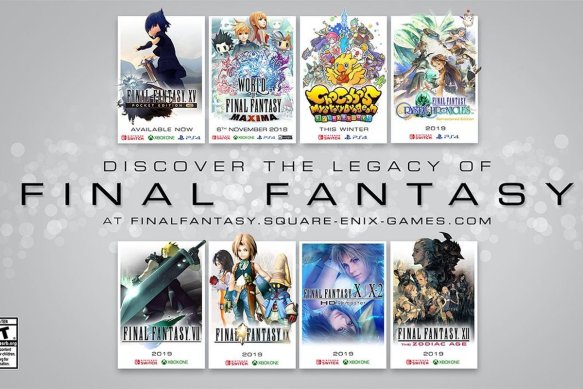 SQUARE ENIX® today announced that several titles from the legendary FINAL FANTASY® series are coming to the Nintendo Switch™ system, the Xbox One family of devices including Xbox One X, PlayStation®4 computer entertainment system and STEAM®.

The fun starts with today’s release of FINAL FANTASY® XV POCKET EDITION HD for the Nintendo Switch, and the upcoming release of WORLD OF FINAL FANTASY® MAXIMA on November 6th. The Chocobo’s Dungeon series also returns for the first time in ten years with Chocobo’s Mystery Dungeon EVERY BUDDY!™ bound for release this winter. The remaining titles, including the return of co-op action RPG FINAL FANTASY® CRYSTAL CHRONICLES® Remastered Edition, will release in 2019.

The full list of the announced FINAL FANTASY titles and platforms are available below:

Further information on each title is available at: http://sqex.link/FFgames.

GameCity is throwing a giant housewarming party at its main festival venue in the middle of Nottingham town this coming Saturday 25 October to celebrate moving in and taking it over for the week.

Located at 24-32 Carlton Street, just one minute from the Lace Market tram stop, the GameCity venue covers five floors, has three galleries of brilliant stuff and will be full of like-minded video game fans.

For the whole of the opening weekend, the GameCity venue will be the place to be to make and play games in the Open Arcade, eat cake, make a tribute to your favourite game character to be displayed on the Wall of Game, build a cardboard arcade machine and generally have a brilliant time. Did we mention eating cake?

Most of all, this is an opportunity to put yourself into GameCity. Bring along something to stick on the walls – an old game magazine, manual, or your own artwork – and help us turn it into a colourful world of relentless brilliance.

Be there at 10am on Saturday 25 October and you can literally start a festival. To find out more go to http://gamecity.org/festival/gauntletsignup/

Microsoft Corp. on Tuesday unveiled its next Windows operating system, Windows 10, and gave a first look at an early technical preview for the PC available Oct. 1.

The announcement highlighted advancements designed for business, including an updated user experience and enhanced security and management capabilities. The company also introduced the Windows Insider Program, kicking off its largest-ever open collaborative development effort to change the way Windows is built and delivered to best meet the needs of customers. Program participants will receive the technical preview of Windows 10 and a steady stream of builds through the development cycle to use and give feedback on.

“Windows 10 represents the first step of a whole new generation of Windows, unlocking new experiences to give customers new ways to work, play and connect,” said Terry Myerson, executive vice president of the Operating Systems group at Microsoft. “This will be our most comprehensive operating system and the best release Microsoft has ever done for our business customers, and we look forward to working together with our broader Windows community to bring Windows 10 to life in the months ahead.”

Windows 10 adapts to the devices customers are using — from Xbox to PCs and phones to tablets and tiny gadgets — and what they’re doing with a consistent, familiar and compatible experience, enabling even greater productivity. Windows 10 will run across the broadest range of devices ever from the Internet of Things to enterprise datacenters worldwide. Microsoft is also delivering a converged application platform for developers on all devices with a unified app store. Developers will be able to write an application once and deploy it easily across multiple device types, making discovery, purchase and updating easier than ever for customers.

Windows 10 builds nearly everything that businesses need right into the core of the product — including enterprise-grade security, identity and information protection features — in ways that can reduce complexities and provide better experiences than other solutions. One area of advancement is in the work Microsoft has done with user identities to improve resistance to breach, theft or phishing. Windows 10 will also help advance data loss prevention by using containers and data separation at the application and file level, enabling protection that follows the data as it goes from a tablet or PC to a USB drive, email or the cloud.

Management and deployment have been simplified to help lower costs, including in-place upgrades from Windows 7 or Windows 8 that are focused on making device wipe-and-reload scenarios obsolete. Businesses will also have the flexibility to choose how quickly they adopt the latest innovations and influence continued improvements. In addition, organizations will be able to customize an app store specific to their needs and environment. The intent is an app store that will allow for volume app licensing, flexible distribution, and the ability for organizations to reclaim or reuse licenses when necessary.

The early technical preview of Windows 10 demonstrates new levels of flexibility, navigation and familiarity through the Windows experience. Features include these:

The introduction of the Windows Insider Program demonstrates Microsoft’s continued commitment to working closely with customers to help shape the future of Windows. Windows Insiders will be able to give feedback on early builds of the product throughout the development cycle. The program will include various ways for Windows Insiders to engage in a two-way dialogue with Microsoft, including a Windows Feedback app for sharing suggestions and issues and a Windows Technical Preview Forum for interacting with Microsoft engineers and fellow Insiders. More information on the Windows Insider Program and the technical preview can be found at http://preview.windows.com.