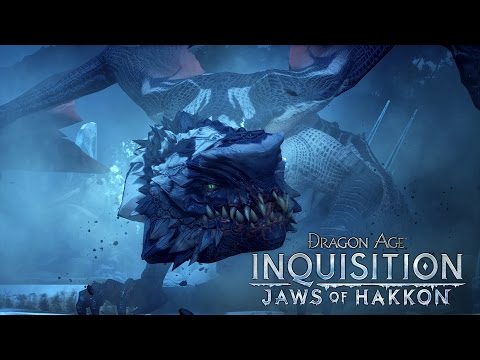 Now available for digital download, the Dragon Age: Inquisition – Jaws of Hakkon DLC adds an exciting new story arc to the campaign and expands on its already vast world with a new region of Thedas to explore. Dragon Age: Inquisition – Jaws of Hakkon is available first on Xbox One, the all-in-one games and entertainment system from Microsoft and PC via Origin for £11.99.

Dragon Age: Inquisition – Jaws of Hakkon will reveal the fate of the last Inquisitor and the powerful dragon he hunted. The new content expands the land of Thedas with a massive new playable area covered in mountains and lush forests, where danger lurks in the shadowy undergrowth. As players explore the vertical landscape and dense wilderness fighting off vicious enemies, they will collect legendary armour and weapons before unearthing an ancient secret that could destroy the world.

“We are humbled by the game’s reception so far but are not done with the world of Thedas just yet,” said Mike Laidlaw, Creative Director, BioWare. “We hope the new DLC speaks to our dedication of growing Inquisition with meaningful and exciting new content for our fans, new and old.”

Winner of over 160 industry awards, including more than 100 Game of the Year awards globally, Dragon Age: Inquisition is set in an epic, dark fantasy world where players are empowered to shape and drive their experiences. BioWare’s hallmark gameplay narrative will immerse players with engrossing choices that allow them to experience unique moments based on those decisions. Dragon Age: Inquisition is developed on an RPG game engine underpinned by EA’s cutting edge Frostbite 3 technology.

“For Dragon Age: Inquisition, a special team of veteran developers from the Dragon Age and Mass Effect franchises created fun, fast-paced multiplayer gameplay that requires strategic teamwork on top of Inquisition’s party-based combat and extensive loot and crafting system,” said Aaryn Flynn, General Manager, BioWare. “It was early in the game’s development that we realized how much fun fans of our series were having, with so many players teaming up in Mass Effect 3’s multiplayer mode. We can’t wait to give Dragon Age fans an even bigger and deeper experience.”

In Dragon Age: Inquisition’s multiplayer mode, four players will team up across a range of multiplayer quests and objectives, exploring intricate dungeons and vanquishing all who oppose them. While dungeon-crawling, players will collect loot, salvage items, craft new weapons and armor, and unlock new characters. At launch, players will be able to unlock up to twelve characters across the three Inquisition classes of Legionnaire, Reaver and Mage, each playing a different and strategic role in multiplayer combat. Multiplayer in Dragon Age: Inquisition is a standalone experience from the open world story players will embark in the main game, and will not have an impact on single player progression or story.

Players can pre-order Dragon Age: Inquisition to get special bonus content. Visit the Dragon Age website for more information on editions, including the Deluxe Edition available for pre-order and the upcoming Inquisitor’s Edition.