The new Nintendo 2DS system gives you all the features of the Nintendo 3DS and Nintendo 3DS XL, minus 3D viewing and the price makes the world of Nintendo games even more accessible. The 2DS is compatible with all Nintendo 3DS and most Nintendo DS games; has wireless connectivity for multiplayer and co-op play and has access to the Nintendo eShop, with digital games, free demos, and special offers.

The 2DS has a similar design to the 3DS with the dual screens but it has no hinges. This is to help the console last in the hands of over excited children who may have trouble with the hinges of the 3DS.

It will be available in “White + Red” or “Blue + Black” from 12th October, the same day Pokémon X and Pokémon Y comes out. Nintendo of Europe doesn’t set the price of hardware in the UK, but GAME has set its price as £109.99.

Nintendo of America chief Reggie Fils-Aime said “Nintendo has one of the strongest and most diverse video game lineups in our history,

“Today we’re making those unique Nintendo experiences more accessible and affordable. However you play and whatever you play, Nintendo has you covered.”

You can view an introduction video to the 2DS below: 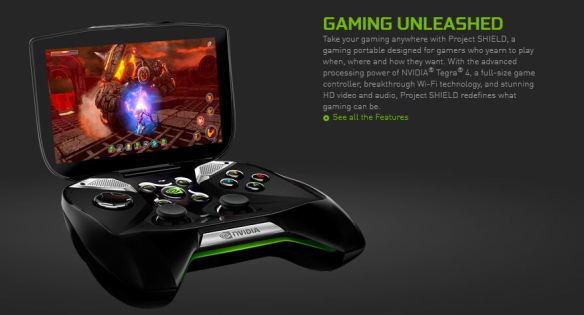 Train2Game has discovered that Nvidia just announced Project Shield, a new gaming console that looks like a controller attached to a 5 inch HD screen.

The new hand held console runs on the Android operating system but what sets it apart from the other android platforms is that it has a controller similar to a current console controller for ease of use.

Project Shield is powered by a custom 72-core Nvidia A15 GeForce GPU and features a 5-inch 720p retinal multi-touch display, integrated speakers, wi-fi connectivity and the Android operating system. It’s also designed to interface as a controller with an Nvidia GPU-equipped PC, allowing you to play games from your couch.

Jen-Hsun Huang, co-founder and CEO of Nvidia said “Project Shield was created by Nvidia engineers who love to game and imagined a new way to play. We were inspired by a vision that the rise of mobile and cloud technologies will free us from our boxes, letting us game anywhere, on any screen. We imagined a device that would do for games what the iPod and Kindle have done for music and books, letting us play in a cool new way”

No word yet on what the device will cost. A post on the official GeForce website lists a tentative release window of Q2 2013. The site states “It will first launch in the US and Canada, with a worldwide rollout to follow. Pricing and final specs will be unveiled closer to availability.”

The Android gaming platform seems to be a big player in 2013 with the OUYA games console, the recently announced GameStick and now Project Shield from Nvidia. 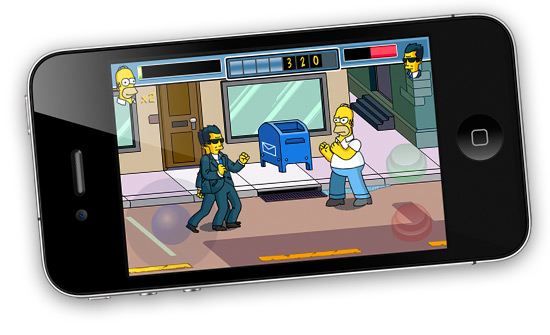 The Train2Game blog has previously reported on cloud gaming, and how some believe it’s the future of the games industry.

However, owner of cloud gaming service Gaikai Dave Perry – who has previously been quoted by the Train2Game blog – doesn’t believe cloud is a threat to consoles. He think the threat to those comes from somewhere else.

And while Perry believes games consoles like the PlayStation 3 and Xbox 360 could survive thanks to their ability for use as multimedia entertainment devices, he’s not so sure about traditional handhelds.

“I think the handhelds are getting challenged very aggressively by the mobile phones,” he said. “I find myself spending a lot of money on iPhone, and if you look at a handheld today, the ones that people keep making, they still make them as a gaming machine.”

“Kids today… don’t want to carry anything that just does one thing. They carry their phone and it does everything. And so if you make single function devices, then you’ve got a problem. That’s my concern for handhelds, is this single function side of it”

Perry’s comments echo those the Train2Game blog reported Capcom made at the beginning of this year. They argued that smartphones including the iPhone are dragging consumers away from traditional handheld consoles.

And as reported by the Train2Game blog earlier this year,  Apple could ‘own’ the games industry, at least according to Former PlayStation executive Vice President Phil Harrison.

“At this trajectory, if you extrapolate the market-share gains that they are making, forward for ten years – if they carry on unrestrained in their growth, then there’s a pretty good chance that Apple will be the games industry,” Harrison told Edge

So Train2Game, is Apple the biggest threat to the rest of the games industry? Should it be considered a threat at all?

It’s entirely possible that some Train2Game students could end up developing games for the upcoming PlayStation Vita in future.

At least that’s the case if one or more students end up working for an indie studio looking to develop on the handheld console.

“I can confirm that Sony was generous enough to loan us some kit, and that’s one of the many reasons why I big them up every opportunity I get.” said Managing Director Paul Johnson.

“They really do seem to have gotten behind smaller developers, based on my own experience and from talking with other small devs, and I think they should be saluted for it.”

“We’re entering a new era in which digital downloads can be translated into mass market sales for smaller operators – once only the preserve of the big boys.”

Johnson noted that the PlayStation Vita dev kits aren’t for keeps but “are just loaners – we have to give them back when we’re done.”

As an industry, we have to support those smaller teams, and let them try out their ideas, without doing so, the whole industry will stall, in terms of innovation.” Said Sony Computer Entertainment Worldwide Studios boss Shuhei Yoshida.

“PlayStation Vita will revolutionise the portable entertainment experience,” said Sony CEO and Exeuctive Vice President Kaz Hirai  “It gives you the most complete entertainment package in the palm of your hands.”

For more information about the PlayStation Vita, see the full report on the Train2Game blog.

So Train2Game, is it a positive move that Sony are loaning dev kits to indies? Would you like to develop for a handheld such as the PlayStation Vita in future?

MCV Online report that invitations to the gathering have been sent out to the press, and suggest that Nintendo will reveal a European launch date and price for the 3DS, along with a launch line up.

The Nintendo 3DS is not only the world’s first 3D handheld console, but it also offers the chance to play games in 3D without the need for special glasses. Train2Game students who wear regular glasses are no doubt pleased about this!

The Nintendo 3DS will be available in Japan from February 26th 2011, with a European release date expected to be in March. If that is the case, it’ll mean eager Train2Game students should be able to resist importing a 3DS from Japan!

There are no official launch titles yet, but earlier this year Nintendo revealed a software trailer that shows a wide variety of 3DS games in development. Big name titles include Super Street Fighter IV DS, Metal Gear Solid Snake Eater, Dead or Alive Dimensions, and Mario Kart 3DS. This morning CVG has reported that The Sims 3 will also be coming to Nintendo’s handheld.  You can see the Nintendo 3DS software line up video here on the Train2Game blog.

While we have no official confirmation of what the launch titles will be, though this is likely to change after the Nintendo event! You can check out the Thoughts of Train2Game blog to see which games Gabe believes will be available with the Nintendo 3DS at launch. Of course, all will be revealed on January 19th.

Earlier this month on the Train2Game blog, we reported on how handheld consoles are losing the mobile gaming market to smartphones. Could the Nintendo 3DS help slow down this trend?

So Train2Game, do you want a Nintendo 3DS? Are you looking forward to the announcement? And which games do you expect to be launched with the handheld console next year?