Independent game developer and publisher The Behemoth is excited to announce Castle Crashers®  Remastered for Xbox One will release on September 9, 2015.

Castle Crashers Remastered will release in North America on launch day with other countries to follow as ratings are approved.

Hack, slash, and smash your way to victory in this Remastered edition of the popular 2D arcade adventure known as Castle Crashers! At 60 frames per second, Castle Crashers Remastered delivers hi-res visuals with updated textures 5x the size of the original. Up to four friends can play locally or online to save your princess, defend your kingdom, and crash some castles!

*A brand new mini-game Back Off Barbarian. Jump and hop across the level to avoid the enemies!
*Larger textures and twice the framerate of the original Castle Crashers for Xbox 360
*Unlock more than 25 characters and over 40 weapons!
*Intuitive combo and magic system: Unlock an arsenal of new attacks as your character progresses through the game.
*Level up your character and adjust Strength, Magic, Defense, and Agility.
*Adorable animal orbs are your companions. Each adds different abilities to aid you on your journey.
*Arena mode: Battle other players in free-for-all or team matches!
•Insane Mode: Test your skills in the ultimate campaign challenge

Dan Paladin, co-founder & art director of The Behemoth, explains: “Over a year ago we started thinking about the future. Castle Crashers would disappear along with lots of other games once the ‘Last Gen’ would wave goodbye. Millions of people have enjoyed the game and written to us with such amazing experiences, it seemed like it’d be a loss to just let it vanish for any new or returning console players.”

In addition to Castle Crashers Remastered, the original XBLA version of Castle Crashers will be playable with Xbox One Backwards Compatibility but there is no release date yet.

It is the end of the week which means its time for the Train2Game news round up. There are many trailers for you this week!

Arkane studios has just released a new gameplay trailer for Dishonored: The Knife of Dunwall, the second add-on pack for Arkane Studios’ critically-acclaimed first-person action game. In The Knife of Dunwall you take on the role of Daud, the legendary assassin who killed the Empress, and access his weapons, gadgets, allies and supernatural abilities. After assassinating the Empress, and forever changing the fate of Dunwall, you embark on a search for redemption. You can enjoy the trailer here http://www.youtube.com/watch?v=GHV4R3cseVE

Independent developers and wannabe videogame musicians will be able to quickly and easily create authentic chiptunes when eJay Pure hits iOS and Android later this year –with your help. The 1,000 strong sample pack will mark the first time the eJay series has catered for this booming genre – and illustrates the breadth that Wired Productions is bringing to the core eJay experience. You can support the release of eJay by giving to their Kickstarter at http://www.kickstarter.com/projects/wiredproductions/ejay-pure

Pokémon X and Pokémon Y launches worldwide in October. Today, the mysteries of the newest Pokémon titles continue to grow with the unveiling of a Pokémon that is strangely familiar to Legendary Pokémon Mewtwo! What is this new Pokémon? How will you encounter it in Pokémon X and Pokémon Y? When will you know more? So many questions! You can see this new Pokémon in the following video http://www.youtube.com/watch?v=H-k1E83_nnU

Warner Bros. Interactive Entertainment and DC Entertainment released an all-new trailer for the upcoming DC Comics fighter Injustice: Gods Among Us – set to launch next week on 19th April – which focuses on the Green Lantern’s role within the game’s story and his struggle to defeat his ultimate foe. A sworn intergalactic defender of the innocent, within the story of Injustice: Gods Among Us, Hal Jordan is forced to clash with a carbon copy of himself. As he summarizes in the trailer, “My oath says that no evil shall escape my sight. So what happens when that evil is me?” You can enjoy the footage of GL here http://www.youtube.com/watch?v=W6jrq2I8OKc

Having just released the amusingly fun BattleBlock Theater, The Behemoth revealed that they’re already working on their fourth game creatively titled Game 4. The studio are also talking about whether or not they would make sequels to any of their games such as Castle Crashers. While there are no details regarding Game 4, Behemoth expressed interest in making fighting and MOBA games. They also have “no problem” making another game similar to CC if “we feel we can make a beat-em-up that’ll take the genre somewhere else,” said Behemoth’s co-founder and art director Dan Paladin. 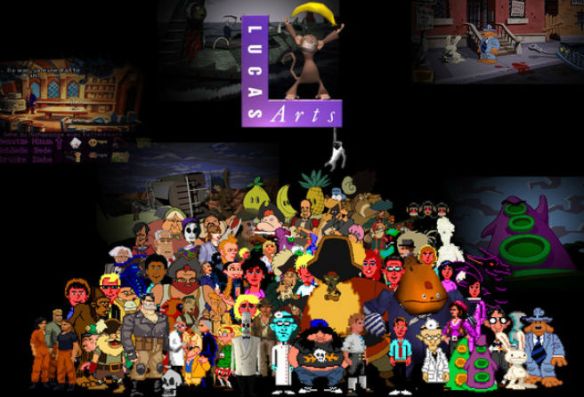 It is Friday so it is time for another Train2Game game industry news round up.

The saddest bit of news this week was that the new owners of LucasArts, Disney, has shut down the company. LucasArts were responsible for making many of the Star Wars licensed games as well as other games such as Monkey Island. A LucasFilm representative suggested that properties such as 1313 and Star Wars: First Assault could still find a home via a third party.

Warner Bros. Interactive Entertainment and DC Entertainment announced that the Injustice: Gods Among Us game is now available on the App Store. Developed from the ground up by award-winning NetherRealm Studios, this free-to-play mobile game delivers stunning graphics and a completely unique fighting gameplay experience. The mobile game features a collectible card mechanic and engages players in 3-on-3 tag team combat that pits many of DC Comics most popular icons such as Batman, Superman, The Flash, Wonder Woman, Green Arrow, Aquaman and more against one another. Fans who also own the forthcoming Xbox 360 and PlayStation3 versions will be able to unlock content in the console versions that will be available in the mobile game, and vice versa, by registering for a Warner Bros. ID (WBID) account and playing the game.

Perfect World Entertainment Inc. and Cryptic Studios are pleased to announce that on April 30, 2013, the free-to-play action MMORPG Dungeons & Dragons Neverwinter is heading into Open Beta, allowing millions of players unrestricted access to the game world. Neverwinter is Cryptic and Perfect World’s proof that Western free-to-play games, when built from the ground up, can compete with even the biggest boxed subscription titles. On April 30, the companies invite all gamers to put that claim to the test. There will be no character wipes or restricted access after the start of Open Beta. Players can still become Founders through Neverwinter’s Founder’s Pack Program. Benefits include exclusive access to Beta Weekend 4, permanent in-game items that are unique to Founders, early access to Open Beta, and VIP perks. To take advantage of these benefits and to gain exclusive access to Neverwinter’s Beta Weekend 4, players may visit: http://nw.perfectworld.com/founderspack/

The latest set of downloadable content for Treyarch’s Call of Duty: Black Ops II has been confirmed for an April 16th launch on Xbox Live. The pack will include four new maps as well as a new zombie mode, available for 1200 Microsoft points or free to existing season pass holders. The four new maps are: Magma, a modern Japanese village featuring volcanic eruptions; Encore, taking place in the aftermath of a London music festival; Vertigo, a futuristic high rise building in India and Studio, a Hollywood movie back lot which describes itself as a “contemporary remake of Firing Range” which was found in the original Black Ops. By far the most intriguing addition to the newest DLC is the new Mob of the Dead mode, which sounds interesting enough to breathe life into the unspectacular collection of zombie content available currently. In it you play as a prohibition-era mobster locked up in Alcatraz whose attempts to escape are “foiled by the rise of the undead.”

Finally, creators of the hit game Castle Crashers, have released a new game. Blocks, Cats, Hats, Betrayal! This is how The Behemoth have described their new game, Battleblock Theatre. This newly released game, that is currently only for XBLA, is all about platforming, a “story of geometric proportions”, several modes of online gameplay and a massive amount of replayability. It has over 450 levels, hundreds of unlockables to find, over 300 prisoners to free and The Behemoth is calling it their largest game to date. The Behemoth said they are considering future ports, just like they did with Castle Crashers, but since they are a small studio it would take them quite some time to port if they do decide to bring the game to PC or PS3.

The latest Microsoft Live activity chart shows Minecraft: Xbox 360 Edition at the top for the first time, rsing ahead of acclaimed retail games Call of Duty: Modern Warfare 3 and FIFA 13. The Call of Duty games have been at the top of the chart for much of the past four years.

It is another impressive milestone for Minecraft. Earlier this month, developer 4J Studios revealed it had sold over four million copies becoming the best-selling XBLA game ever, beating titles such as Trials, Trials Evolution and Castle Crashers.

Other games Minecraft is more popular than are Call of Duty: Black Ops, Borderlands 2, Halo: Reach, Battlefield 3 and Call of Duty: Modern Warfare 2.

Interestingly GTA IV is still in the top twenty and it is nice to see the free-to-play title, Happy Wars, in at eleven.

Microsoft’s Live Activity chart is based on unique users – that is, game playing while connected to Xbox Live. You can see the top twenty below:

As you’d expect, Minecraft is also the top Arcade title, ahead of The Walking Dead, Sonic Adventure 2 and Trials Evolution.